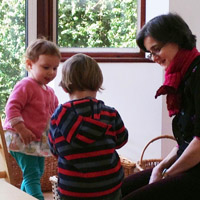 Hannah Devlin, science editor of the Times, wrote that “Children are more likely to learn to share if they are encouraged to part with a toy of their own accord rather than being forced to hand it over.”

She was reporting a study published in the Journal of Psychological Science which showed that children of three to five years who had been give the opportunity and encouragement to share stickers with a sad puppet were more likely to repeat the action with another sad puppet than children who had simply been told to share. This has important lessons for all parents and carers of young children.

Sharing is a social action which requires practice. Children need to practise feeling empathy with others and they also need to practise giving. The study showed that children who had been told to share simply followed a command: they were learning obedience. Those who were encouraged to share learnt to take an interest in the feelings of the sad puppet and experienced their own ability to make a difficult decision.

This research confirms my own experience with children under three. I find that in my groups of babies, one year olds and two year olds, children are much more responsive when adults take time to talk about things with them, than when they are simply told what to do. Even the youngest child who has snatched a toy listens thoughtfully when an adult says, “He’s upset because he was playing with that toy. What shall we do?” Such a question can even place a two year old into a moral dilemma, where one can see that she is trying to work out the best course of action. Children who are spoken to like this look with openness and interest at the child in question and very often they give back the toy.

In contrast when children are told to return a toy they have taken, they often glance defensively at the other child and at the adult instructing them. They don’t appear to be engaged in the distress of the other child. (Outwardly, the result is similar in both cases: sometimes they return the toy, sometimes they don’t.)

Learning to share is a long and – for some children – difficult process. It is hardest for children under three for developmental reasons. But this doesn’t mean it will come easily to your three or four year old – or your older child. Having patience with them as they learn will help them to have patience with themselves later on.

Although we often remind children to “share” I think there are more useful way to support young children in their social learning. Sharing is complex and it is difficult to do. Think what it would take for you to share a pen with a partner – not always easy. However by offering concrete strategies and respecting children’s ability to sort things out themselves, I believe it is possible to guide even the youngest children towards socially developed actions.

The following five tips for encouraging sharing in children under three are all based on the premise that children “learn to share by choice”. That is, they support children to share voluntarily – rather than by following instructions.

1)  Try to allow children time to sort out their own conflicts when playing together. This is an  opportunity for them to learn useful things like how to stand up for themselves  or what works when two want a toy. For example children sometimes learn that if they offer an alternative toy to another child, that child will let the desired one drop.

2)  If your child looks as if he is about to take a toy from another child, you can give him strategies that address his wish to have the toy – but are also respectful to the other child. For example, tell him: “You can ask her if you can have it when she’s finished.”

3)  If your child does take a toy, you can help him notice the effect of his actions and begin to empathise with the other child by saying something like: “Look, he’s crying. What shall we do?”

4)  Don’t try to make everything fair when children under three play together. You can never keep track of it and children of this age don’t care about fairness. Instead try to think about flow and harmony – and base your interventions on this.

This last principle, of modelling the behaviour you want to encourage, is perhaps the most powerful way of supporting children’s learning and development, because imitation is one of the main ways they learn.

We can all support their ability to share by being good role models – and trusting that our children will want to be like us in the end.